The process industry is faced with increasing economic pressure and a no-tolerance attitude toward environmental accidents. The presence of a large number of storage tanks containing dangerous products constitutes one of the major risks of pollution. Storage tanks are continuously subjected to environmental effects, unavoidably leading to degradation under the form of a corrosion attack. This degradation causes a gradual loss of material and accumulates over the years, ultimately resulting in complete wall penetration and leak formation. Through a leak, the contained product will pollute soil and groundwater. RBI is well established and widely used in the oil and gas, refining, petrochemical and chemical industries. Internal examination of storage tanks, especially of the floor, is difficult and costly. Prioritizing inspections and repair based on risk can improve reliability by focusing inspection resources on those damage mechanisms driving the tank's risk.

A criticality assessment was conducted on a Storage Tank Farm in Seabrook Texas. The project involved an RBI assessment of 14 pressure vessels, 2 heat exchangers, 108 storage tanks, 888 piping circuits and 187 relief devices. A total of 17 items were found to have a "High" rating. The distribution of overall criticality ratings for the items in scope is summarized as follows.

Seventeen items were in the "High" Criticality category due to a combination of internal and external corrosion. The relief devices are High because of the deterioration potential based in part on last inspection date

The following shows the Criticality Matrix for this facility with the number of equipment item components in each block. These represent all of the equipment types included in the study. The Probability of Failure Rankings are on the vertical axis and range from "1" (Very High Probability) to "5" (Very Low Probability). The Consequence of Failure Rankings are on the horizontal axis and range from "A" (Catastrophic) to "E" (Minor). 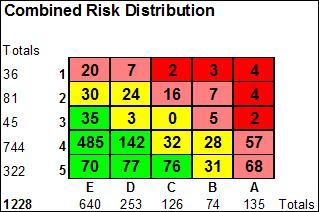 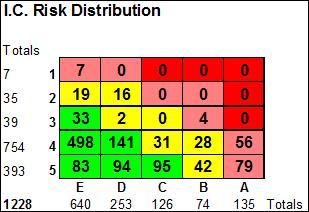 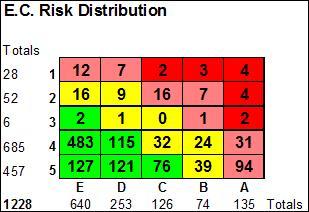 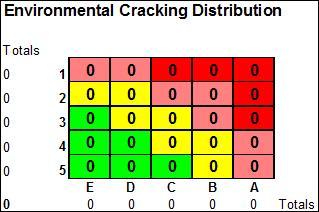 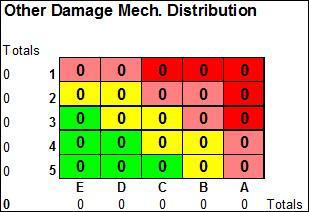 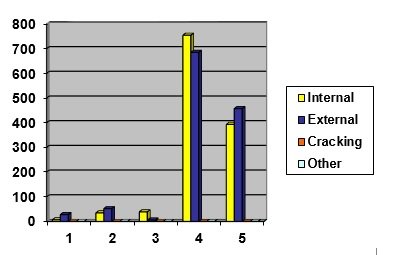 Probability of Failure by Damage Mechanism

The Criticality Rating considers both the probability and consequence of failure categories. The probability of failure is based on the failure mode "failure to relieve at design pressure", which covers the most important failure scenario. The probability category is established by considering the potential for internal corrosion, fouling and plugging. Credit is given when a rupture disk protects a relief valve. Interviews with operations personnel and reviews of the shop test reports are used to determine the deterioration potential. The potential and the time interval since the last shop overhaul are used to determine a deterioration factor, which is converted directly into a probability of failure category. This study revealed that many of the pressure relief devices were in "like new" (4) condition.

The Probability of Failure Rankings are based on valve history, length of time in service, and the potential for fouling or plugging.

The Consequence Rankings are based on the highest consequence of failure of the protected equipment items. 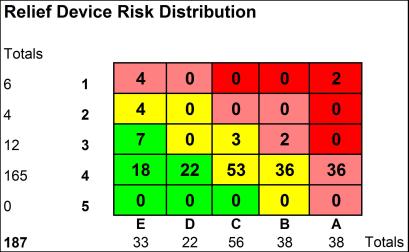 Inspection plans were generated for all equipment items in the study. Each plan included the Equipment ID, Inspection Priority Ranking, all potential damage mechanisms associated with each item and the suggested inspection method to address each damage mechanism. The following represents the proposed inspection work plan for the highest risk items found in the study. The next step in managing the RBI program in this unit is to follow through the recommended inspections. Then for items found to be in the Higher Criticality Categories, establish a plan for managing them. Some of the items can be addressed very quickly; others have to wait until the next shutdown. The table below lists the HIGH Criticality items, the mechanism responsible for the HIGH Risk and a general inspection recommendation.

The following shows the projected risk reduction in dollars per year as a result of focusing inspections on the higher criticality items. For this analysis, it was assumed that the risk reduction would result from addressing the highest 8 (1%) of the fixed equipment items in the study, resulting in a 90% risk reduction of nearly $2,500,000 per year. 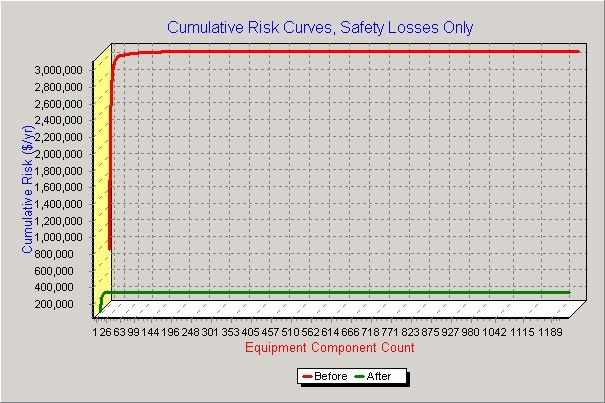 The above provides insight into the results of an RBI study across a number of fixed equipment asset families, relief devices and piping circuits. In addition to the significant risk reduction delivered ($2.5M annually) from an RBI program, cost savings can be realized by a factor of 50% for vessel inspections and up to 75% for piping inspections. Typical turnarounds can be optimized and internal inspections of less critical assets extended allowing refiners to realize millions in USD in T/A savings.

One of the most important steps in an RBI project is the corrosion study or damage mechanism review.

When evaluation of inspection results suggest that an asset is near its end of useful life, Fitness for Service evaluations can determine if the asset us suitable for continued operation.

How well do you know RBI? Take this short quiz to test your knowledge of the API 580 risk-based inspection (RBI) work process.

Create mechanical integrity (MI) program value rather than it being seen as a necessary cost to minimize.

What impact does Risk Based Inspection (RBI) have on my organization?

Is your Risk Based Inspection (RBI) program aligned with the API 580 Recommended Practice? Are you ready for certification?

What's actually going on inside all of that fancy software? An introduction to the API 581 methodology.

A deep dive into quantitative Risk Based Inspection (RBI) as outlined in API 581.

What are the hidden benefits of implementing Risk Based Inspection?

A look at how the financial sector's concept of Asset Value Management can be applied to the petrochemical industry.

Other Benefits of Risk Based Inspection Implementation

Additional process data may be needed when environment, stress, and metallurgy are so alligned so as to indicate susceptibility to environmental cracking.

A simple screening to determine HTHA susceptibility and factors to consider when more data is required.

Since the evaluation of inspection effectiveness for RBI can be so subjective, following these suggestions can greatly improve the process.