One of our consultants brings Risk Based Inspection into the grade school classroom for Career Day. 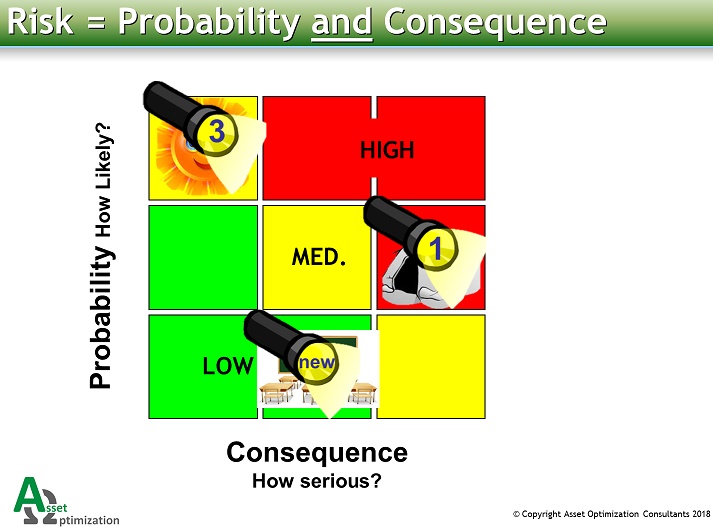 A few weeks ago, I was asked to give a 20 minute presentation to 6 different classes about my job during Career Day at my son's elementary school. While I am comfortable giving presentations, I knew that this one was going to be challenging: How do you talk about Risk Based Inspection (RBI) with 5th graders? I chose to describe our career field as "Risk Management" instead of "Risk Based Inspection". I thought this would help keep the discussion more general in nature to better promote understanding of risk concepts, and to discuss the Risk Management goal of preventing failures in terms of something the students could relate to (i.e. not process equipment).

Since all students had likely operated one, I used a flashlight to discuss Risk Management. I first posed a brainstorming question: "What is the most common reason that a flashlight fails?". While answers included everything from batteries, bulbs, switches, wiring, to "I lost the flashlight", and even "the flashlight was run over and crushed", the consensus for all groups was batteries ("dead" or "worn out").

Once we established that batteries were the most common cause of flashlight failures, I introduced the real-world problem of limited resources by asking: "Do you put new batteries in a flashlight each time that you use it?" The students answered no, and provided reasons why including the cost of batteries and time required to replace batteries. I then posed a challenge: "There are three identical flashlights that may need to be used simultaneously, but you only have one new set of replacement batteries."

To introduce consequence, I gave the students three scenarios where the might need a flashlight and asked "How serious would it be if your flashlight failed in this situation?" The three scenarios where a flashlight might be needed were: "In a classroom in case the power goes out", "To find your way our of a dark cave", and "Outside on a sunny day". The students easily identified "To find your way out of a dark cave" as the most serious situation and "Outside on a sunny day" as the least serious situation.

To bring together the concepts of probability and consequence, I assigned the three flashlights to the three situations graphically on a risk matrix:

I concluded the presentation with the question: "Based upon risk, now which flashlight would your replace the batteries first?" It was great to finish up our discussion by talking about why they changed their minds and now chose the flashlight with the one year old batteries.

8/9/2018 - Anthony Fernandez
Dear Leon, Hearty Congratulations on an excellent approach to teaching kids concepts of Risk Management. Your choice of a Flashlight as an example was indeed innovative and easy for the kids to relate to. I was confronted with the challenge of sharing thoughts to my six-year-old Grandson Noah on Risk Management and on an impulse googled for "Risk Management for Kids", and found your amazing article. Thank you. Warm Regards. (Tony) Anthony W.J. Fernandez Maritime Risk & Casualty Management Consultant Visiting Professor Maritime Law & Insurance Law - Gujarat National Law University 405, Vyapar Bhavan, 49, P. D'Mello Road, Carnac Bunder, Mumbai- 400009 Cell: (+91) 98921 92110 Email: awjfernandez@hotmail.com

One of the most important steps in an RBI project is the corrosion study or damage mechanism review.

When evaluation of inspection results suggest that an asset is near its end of useful life, Fitness for Service evaluations can determine if the asset us suitable for continued operation.

How well do you know RBI? Take this short quiz to test your knowledge of the API 580 risk-based inspection (RBI) work process.

Create mechanical integrity (MI) program value rather than it being seen as a necessary cost to minimize.

What impact does Risk Based Inspection (RBI) have on my organization?

Is your Risk Based Inspection (RBI) program aligned with the API 580 Recommended Practice? Are you ready for certification?

What's actually going on inside all of that fancy software? An introduction to the API 581 methodology.

A deep dive into quantitative Risk Based Inspection (RBI) as outlined in API 581.

How RBI, DMR, and IOW programs can be used to manage reliability of Ethane crackers.

A case study presenting the methods used to calculate qualitative risk for a critical refrigeration system and the results of the assessment.

Refrigeration system owner/users who are maintaining their assets as prescribed may be unaware of the damage mechanisms that could affect the reliability of their assets and safety of their personnel.

This article suggests additional factors to consider when calculating probablity of failure for equipment exposed to high temperatures.