An AOC consultant, a process engineer, and a reliability engineer discuss the differences between Safe Operating Limits, Standard Limits, and Integrity Operating Windows.

Is there any difference between Safe Operating Limits (SOL) and Integrity Operating Windows (IOW)?

Short answer is NO.

But let me tell you how all this started.

I was recently in a meeting where 2 engineers were talking about this topic. One of them was a process engineer, the other one was reliability engineer.

He continued speaking and stated that a SOL is operating parameter, such as pressure, temperature or flow, that defines the limit to which equipment within the plant process can be safely operated. Deviating from the safe operating limit can result in immediate and severe consequences to health, safety and the environment.

On the other side of the table, the reliability engineer stated that from his point of view the most important items to be defined were the Integrity Operating Windows, both critical and standard. He clearly said that IOWs are derived from performing a corrosion hazard analysis. He also mentioned that IOWs are defined values for process variables that can affect the mechanical integrity of an asset if the operation deviates from the established limits for a predetermined length of time.

At some point in the conversation, both looked at me and asked "What is your opinion on this matter?"

I said, "You both are correct on your statements."

They thought I was just joking and asked, "What do you mean?"

I replied that SOL and IOW critical are basically the same thing.

If you put an SOL chart and IOW critical chart together, they will look like this: 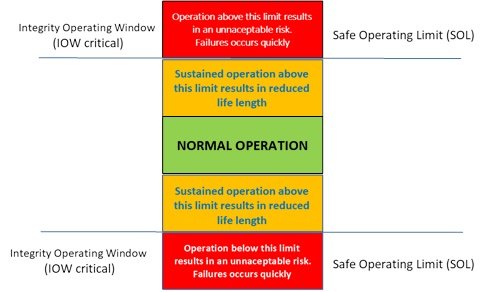 What most people consider "differences" between SOL and IOW critical is just the approach either Operations / Process Engineering / Reliability Engineering or Maintenance groups within an organization decide to manage.

Both looked at me and said, this is an Ah-Ha moment... They agreed that SOL and IOW critical are equivalents; what they initially viewed as differences were just a result of their different perspectives. The process engineer was looking at the overall function of the plant or unit and the reliability engineer was focused on the mechanical integrity of the asset or equipment. Same thing, just different perspectives!!

6/13/2019 - Zamaluddin
Dear Lenin,I agree that the concept of SOL and IOW are the same, however the parameters that both system not always the same. To me and to most of other people SOL put more focus on physical aspect but IOW covers the chemical aspect that always missing in SOL. SOL concern on short term while IOW is more towards long term effect on asset life.Thank you for good article.
6/18/2019 - Lenin Elorza
Dear Ali Zamaluddin.First of all, thanks for your feedback on the article. I agree with you that the parameters covered and addressed by SOL and IOWs are not always identical.The main intent of the article was to highlight the fact that both concepts are basically the same. The perceived differences are related to the scope and approach used to manage them, as well as, what you clearly stated that SOL focus on immediate failures while IOW is more focused towards long term effect on asset life
7/2/2021 - Palanivel Murugan. T
Dear Lenin Elorza, Thanks for a very informative article. Certain SOL's and SOL related alarms may not form part of IOW . However, the organization can integrate SOL & IOW (SOL Alarms can be made part of IOW system). Regarding SOL, more clarity is required as SOL exceedances will normally be addressed by providing SIF.
7/23/2021 - Vincenzo Palermo
Dear Lenin, working with you it is a big pleasure and honor. Thank you for this very useful article!

How do I use GE APM to perform MI/RBI tasks?

How important are they?

A dysfunctionality found in many refineries, chemical plants, and other production facilities, is a lack of common asset management work processes.

A look at how the financial sector's concept of Asset Value Management can be applied to the petrochemical industry.

PHMSA has out for comment, draft document information, that clarifies its jurisdiction in relation to OSHA for Midstream Processing Facilities.

How RBI, DMR, and IOW programs can be used to manage reliability of Ethane crackers.

Things are always changing. Including your risk profile.

What are the hidden benefits of implementing Risk Based Inspection?

When working in Brazil please be aware that Brazil has its own Regulatory Standard – NR13 – that covers the minimum requirements for managing the integrity and inspection of steam boilers, pressure vessels, storage tanks and interconnecting pipes.